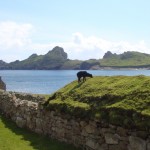 It was on a very dark night in late April of last year (1976) that I travelled on the army L.T.C. from Loch Carnan to Hirta. On my approach Dun and Conachair were silhouetted against the dark sky and then on entering Village Bay I saw the long row of lights stretching from the jetty to the beach landing strip, like beacons, guiding our way as we slowly came inshore.

With the assistance of the army and the Department of the Environment I was soon opening up the Trust houses, putting new panes of glass in the windows broken with the winter storms, and bringing out of store beds and mattresses for the members of the first work party due to arrive in three weeks time. The houses were damp and cold but fresh air worked wonders in a little time. The rusty cooker in No. 1 almost sparkled again with applications of Brillo.

Village Street was like the finest lawn. April had been a good month and only the Soay sheep had walked along it clipping the grass very closely, and with no passage of humans there were not yet the sodden tracks or ruts that were to come again in the next month or so.

Early in May Dr Mike Harris and Stewart Murray were engaged on a Puffin Study and swinging across the Breaches Buoy with them I enjoyed two wonderful days on Dun. These days were perfect, warm and dry and the luxuriant vegetation we know on Dun, had hardly come to life and it was an easy scramble for me to traverse from end to end. Approaching the fort and beyond you get very close to the colonies of razorbills, guillemots and shags, while puffins and fulmars whirr or glide over your head. It is a truly wonderful bird island.

At the end of April a black-tailed godwit was feeding in the meadow at Lady Grange’s house. The months of May and June are wonderful times for studying bird life, first the nesting and the hatching of chicks. Besides all the familiar seabirds, redwing and collared dove were often around the Factor’s house. In early May I counted over 100 golden plover on the slopes of Ruaival and a similar number of eider in Village Bay. It was a common sight in the early morning to see the male eider and his mate walking towards An Lag looking for a home amongst the boulders. A golden eagle flew around Oiseval for several days and a female merlin was seen. I began to recognise the Soay ewes and rams which took us the same territory every morning and left it for higher ground in the evening.

In the two months or so that I was on Hirta, the weather was not at its best, but when one gets a good day, the others are forgotten. There were a lot of south east gales which were on shore to Hirta.

It was great to meet Joe Keppie with the first work party about this time, some of whom were glad to be on terra firma again. By this time I had set up shop in the schoolroom and arranged some artifacts in house no. 4. It may be of interest to mention that the shop had a turnover of approximately £500 and perhaps the creation of a small Folk Museum could be a project for a future work party.

My days on Hirta were very pleasant ones and I enjoyed the company and hospitality of the work parties. I have a lot of contact with the army personnel and contractors men often through the shop – I was always welcome at the Puff Inn an in the Messes and I cannot speak too highly of the willing co-operation of the C.O. and other ranks in my work and in helping in every way possible for the comfort and enjoyment of my stay.